Life's been fairly peaceful since I last blogged.  My friend John is giving me a ride to my parents' in Colorado tomorrow, for a visit until next week.  They got rid of their computer, so I'll probably be out of cyber touch for a while. 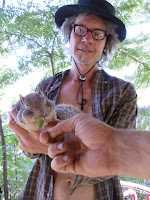 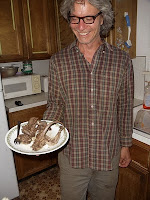 Carolyn took some pics of a roadkill dinner I shared with her and David, and I told her I'd post them here.  I found this squirrel freshly killed on the river road.  It had an acorn stuck between its teeth when I found it, plus about 14 acorns stuffing its cheeks!  Their looks of contentment say it all! 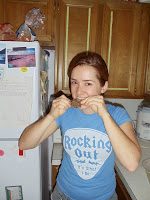 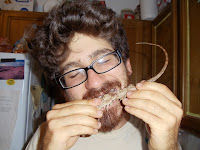 A Loud and Clear Calling

A few days later, Carolyn, Aaron, and I went to a party of mostly rock-climber kids way out in the desert at Jug Handle arch.  Though I'm not really a rock-climber, I love rock climbers.  The times I've done it, I've realized rock climbing is a spiritual path that teaches perseverance and humility, minus dogma.  Okay, once in a while I meet a really cocky climber, but not too often ;-)

Anyway, they had set up a really really high swing, made with a rope and harness, from the overhanging rock near the arch.  It was absolutely exhilarating!  Then we jammed around a fire with drums and a guitar and my flute.  Even though I can't play the guitar, I eventually picked it up and used it as a percussion instrument, sort of strumming it, and it didn't sound half-bad.  "I wonder why I never learned guitar?" I thought.  All the sudden I had this almost mystical urge to learn how to play guitar.  "But I'm 49," an alter voice said.  "Should that matter?" was the reply in my head.  "But I don't have a guitar," the other voice countered. 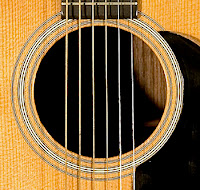 The very next night (a couple nights ago) I went dumpster-diving at the thrift-store to find warmer clothes for winter.  The dumpster was so full of junk it was overflowing--stuff piled around it.  I dug around a bit and found a booklet on how to play the guitar.  "What a coincidence."  I thought, "But I don't have a guitar," my other voice reminded me, again.  As I was getting ready to leave the dumpster, I took a last glance back and noticed I hadn't checked the stuff piled against it.  I lifted up a box and noticed a guitar case underneath.  "Nice case.  I have friends who might need it,"  I thought.  I lifted it, and it wasn't empty!  I opened it up, and, voila, a guitar!  "Surely there must be something wrong with it for it to be here," I thought.  I brought it back to the farm,checked it out the next morning, and found it was virtually new and flawless!  There were also some instructional DVDs included in the case and two extra strings.  If ever I got a clear message to do something, this time it was, "Learn to play the guitar!"

I've been mulling over blog comments today, and here are some brainstorms to share here.  I'm still working out rough edges, so feel free to point out any flaws you might see.  Ideas are no good if they can't be thrown to Natural Selection.

Now these are generalized statements, and I'm sure you'll find lots of people who don't fit the stereotypes.

This gets into the "non-duality" thing I essay about in the website.  On the lower level, I find I often have a black and white, good and evil, view of things: as is the very nature of the binary human brain.  But on the Higher Level, it's All Good:

Sometimes I like to step back and watch 2 energies at play--one Conservative, one Liberal--one saying nothing's going to get better so why change it, one saying let's progress, evolve, and not discount possibilities.  Both are in myself!  Each annoys the other, yet each holds the other in check.

Both conservatives and liberals are playing out the innate Law of Nature, the Grand Drama!

It's becoming obvious neither will go away any more than positive or negative will go away.  Social conservatives often persecute and often kill their own prophets, just like an ant colony will attack and expel ants that are a bit different.  Social Liberals persecute and often kill their prophets, too, but usually when they have ripened into Social Conservatives (like in the late USSR and Red China and North Korea). Yet religious conservatives preserve the teachings and traditions (Old DNA) for future generations of the ones they once persecuted.

Religious liberals are accepting of other people's viewpoints and new ideas (New DNA), but dislike tradition and are bad at organizing and preserving tradition.  The persecuted sages are secretly grateful to their persecutors for refining their character and catapulting their messages into view of all.  Those who survive rejection are refined, Naturally Selected, secretly admired by their persecutors (silencing or eliminating "heretics" physically often means promoting their message, their Mystical DNA).  The canal to the female ovum is full of spermicide to weed out the unfit.  Those that don't survive go the way of the extinct, and secretly know this is their lot, and they can rest in it.  The two are always with us, battling it out in the Grand Drama. 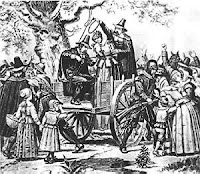 Religion most clearly sets the stage for this Drama.  It is the very nature of Religion to give birth to both the Dogmatist Persecutor and the Persecuted Prophet!  Reading the Torah, for example, it is as sure as the sun shines that Dogmatic Pharisees will arise out of Judaism side-by-side with a prophet Isaiah or Zechariah or  Jesus that they can persecute.  In fact, the prophet Isaiah says himself that it is ultimately God who blinds people's eyes, and God who crucifies the Messiah.  This concept of divinely-imposed blindness of the persecutors is a strong theme in the Quran, too.  This is why the persecuted ultimately realizes: forgive them, for they're clueless what they're doing.  But there's also a blindness of the "persecuted."  Actually, each side often sees itself as the "persecuted."  The left hand becomes clueless of what the right hand is doing.  The lion species could not survive if lions felt the pain of their prey, if the right "knew" the left.  Nothing in nature would survive if the positive "knew" the negative.  In the same way, it is the very nature of the New Testament to give rise to an intolerant Church and a Saint or Reformer to persecute or burn at the stake.  Likewise, you see this in Islam.  It's not as pronounced in Eastern Religion, but it's there.  It was Hindu Fundamentalists who killed Gandhi.  The Word comes to its own and its own does not receive it.  Both the Baghavad Gita and the Tao Te Ching describe this phenomenon, as does the Quran, Torah, and New Testament.  You see it not only in religion, but in science and in every institution and organism.  Ultimately, the baby is a nuisance to be horrifically expelled from the mother's body! 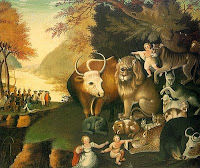 Yeah, ultimately, stepping back and looking at it all, you realize it's All Good.  Good Drama can't exist otherwise.  On the lower level, it's Duality.  On the Higher Level, it's All One--beautiful beyond the human mind's ability to grasp!

People think money is my enemy.  On the lower level it is, in a way.  But money has arisen in human consciousness, evolution, for some mysterious reason.  It's no more my enemy than an obstacle course is to an athlete or a puzzle is to a gamer.  A toy or a game is fun until we learn what we have to learn from it, then we move beyond it.