I’m going to talk about some of the roots of our Western Culture, namely just a bit of hidden Catholic & Protestant tensions. For you who didn't grow up with religion, bear with me, please. And you nominal Protestants & Catholics probably never realized there were tensions between the two faiths.

It’s the Catholic (and Eastern Orthodox) time of Lent, now. Mardis Gras kicked it off. Check out this painting I did for the Mardis Gras fashion show bash: 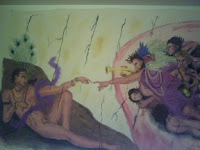 I was going to talk about this painting, Michaelangelo & the Renaissance Ego, the Creation of Adam, as well as my own peacock-feather ego displayed here, but decided to just talk about Mardi Gras, Lent, and Credit & Debt instead.
Mars Day of Grease, Excess Before Penance, Blooming Before Seeding.
Yes, Mardis Gras (Fat Tuesday) came and heralded in what is now Lent, these 40 days before Easter. Mardis Gras and Lent were things we Evangelicals (like most other Protestants) never celebrated. We thought they were just more senseless trappings of the Catholic Church. We considered Lent, like the Catholic confessional & penance, as a token of credit to pay for and excuse sin, the evidence being the debauchery of Mardis Gras. Our reasoning was that we didn't need penances, since this defeated the purpose of the Cross, the Penance of all penances. Protestantism teaches that the confessional is everywhere we go, done at all times, and is done not to a priest but directly to God; and Protestants say Penance is not done by us, but paid for by Christ on the Cross.

So I'm finally facing my karma, facing the reality that I have to speak first to the Christian, and in doing so, also to the non-Christian. I can't be content any other way but to follow my own karma. It's either follow my karma or be thrown into the sea and swallowed by a fish. If every religious person in the world followed his or her own religion (Taoism, Buddhism, Islam, Judaism, Hinduism, Sikhism, etc) Politicians & Bankers & Corporations would have no more power, and would collapse. And I dare say poverty would collapse with them.

[[Though I'm first talking to Christians, it bothers some folks of Eastern faiths or New Aginess that I speak of good and evil. Yes, Christianity, too, like Buddhism, teaches "to the pure all things are pure". And, like Hindu scriptures, the Bible also says God creates both night and day, good and evil. On the lower level, my instinct tells me that my own poop is bad and I should bury it out of sight. But my higher self tells me that poop is good and pure, part of the cycles of life. To a fly, it is nectar. But if my lower self calls poop good and touches it or eats it, then I get sick. If my lower self calls poop good, it is denying the Law of Nature, and therefore really calling poop Evil by denying poop its natural role. So I am a fool, denying the goodness of all things, if I call rape good or if I burn down my neighbor's house. I must not let my left hand know what my right hand is doing if I am to realize the pure goodness of both. I must let my left hand believe poop is evil and my right hand to believe it is Good, if both are to be Good. If the lion weren't bad to the antelope, the lion would be Bad on the higher level and the evolution of the antelope herd would cease. This is the mystery of the Cross, the Eternal Sacrifice of the Purusa (Divine Person) of Hinduism.]]

So What of Mardis Gras and Lent, Excess and Penance? What of Creditor and Debtor?

In the Spiritual Path, the Believer fuses with the Believee in Devotion, the Future fuses with the Past in the Present, the Debtor fuses with the Creditor in Forgiveness, Negative fuses with Positive in the Neutral, the Four Branches of the World fuse together in the Center of the Cross. The Wave Crests become One with the Wave Troughs, stilling to a Sea of Glass, as our turbulent thoughts calm into the Perfect Peace of Zen. As Mary and the Jewish prophets state in the Bible, the Mountains are lowered and the valleys raised. The the Cycles of Time (Karma) cancel each other out at the End of Time, called Eternal Present, called Yahweh (Jehovah). By bowing totally to the Divine Other, the profane self fuses into One with Him. In the Spiritual Path, the Goal becomes the Path. Male and Female fuse into One, perpetually. As a Jewish rabbi said (in my paraphrase), "Of course the Messiah is coming! Perpetually."

Am I talking (gasp) Universalism?

"Love is the Way, the Truth, and the Life. No person can come to the Source except by Love."

This is exactly what your own Bible says, and your own conscience knows it.

Love, and no thing or no one else, is God-incarnate. Humans come and go, but Love is Ever Present, Ever Eternal, Ever come in the Flesh, Ever Dying, Ever Resurrecting, Ever Humiliated, Ever Glorified, the Same Yesterday, Today, and Forever. Love never fails. Become Love.

Don't be fooled by the thrill of thinking you understand these words. Rejoice only when you live these words, perpetually.