If you've been following this blog, you might be curious what happened with the summons I got from getting caught train-hopping in Arvada, Colorado in early August with Roy.  I was to appear in the Jefferson County Court in Golden on October 15.

I called the Court shortly after to see if I could work out avoiding court, to save me hassle and to also avoid court costs and save taxpayers' money.  They told me to wait until mid-September and call them again, asking about a "plea by mail."  So I did.  They gave me instructions, then I faxed the "plea by mail" (my friends Damian and Dorina let me use their fax machine).  I plead guilty and requested either community service or jail time in lieu of any kind of fine, because I live without money.  Then I waited.

Last Tuesday I called them back.  The first woman I talked to told me the plea by mail was rejected and I must appear in court the next day at 1:15pm or I would have a warrant for my arrest.  So I asked her if there was anything I could do, since I was moneyless and car-less, out of state, and didn't think I could make it.  She referred me to another woman.  This woman wasn't very friendly and wasn't open to any other options, but kept saying, "be here or you will have a warrant for your arrest."  She wouldn't tell me why my plea by mail was rejected, either.  When I asked her why nobody contacted me about this, she said, "We don't make long-distance calls."  I had stated in the letter that the best way to contact me was by email, but also leaving open the option of calling my friend or contacting me by snail mail.  By this time I was expressing my frustration.  She then asked, in a not-so-friendly tone, "well, why did you wait so long to fax the plea by mail?"  My mouth dropped open.  "I waited until mid-September, as your office, at this number, instructed me to do!"  She then told me if I couldn't make it to court I could show up at the DA's office by 8:15am to avoid the arrest warrant.  So I hung up the phone, immediately got my backpack, and hit the road to hitch-hike.  It was about 3pm Tuesday here in Moab, and my appointment was at 1:15pm in Golden, Colorado, about 350 miles away.

Hitch-hiking seemed harder than usual.  I got as far as Fruita, Colorado by nightfall in 2 rides.  Fruita happens to be where my parents live, so I decided to pop in and stay with them.  I had been trying to keep them out of this.  Of course they insisted on driving me to court the next day.

So my dad drove me across Colorado.  It was good, because he and I had great conversation the whole way.  My dad talked a lot about how much he adores my mom.  Yeah, believe it or not, my parents have been married over 60 years and adore each other.  But he's naturally concerned about how they are nearing their end.  My mom is getting fairly decrepit and my dad has to care for her more and more.

My dad and I also talked theology.  My dad is a theologian (he used to be a pastor), so we talked a lot about the principles of living by faith and, as Jesus taught, to "lend hoping for nothing in return," and why Jesus said "lend" rather than "give."  How in the world can you lend if you're hoping for nothing in return?  This idea has been on my mind for a long time.  It unravels all these ideas about nature's "interest banking" that have been brewing in my head and heart over the past year.  It's about nature's "lending at interest" as opposed to human ego hijacking this process of lending at interest, bringing corruption into the world.  I'm still working it all out, to write down.  But my dad totally gets it, and it makes me happy we can find agreement at deepest levels.  We used to have arguments about religion in the past (a lot of it having to do with my bitterness over most religion and its hypocrisy), but we've both mellowed and found common ground.

My parents are unusually supportive of my lifestyle and would do most anything for me.  How many parents would could be like that? They are conservative Christians, and they blow stereotypes of what a conservative Christian should be.  Now they have been giving me full support in this latest adventure of going to court for train-hopping.

So my dad and I walked into the courtroom together. 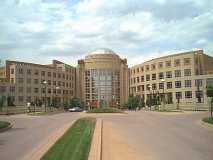 My name was alphabetically near the end of the line, so my dad and I had to listen to case after case before the judge, Susan Fisch, before she got to me.  Seeing the other cases I was preparing myself more and more to possibly be put into a Jefferson County jail.  But I also grew to be very impressed with her.  She seemed to be an endless supply of patience and compassion, and I started relaxing about my own case.  By the time she finally got to me, I told her my circumstances, that I lived voluntarily moneyless and "homeless" as a spiritual path.  For this reason I requested either community service or jail time in lieu of a fine.  I also explained how difficult it was to make it to this court appointment due to my circumstances, and that it would have saved a lot of hassle for us all, and it would have saved court costs and taxpayer money if the plea by mail had been accepted.  She said pleas by mail can't be accepted if there is the possibility of jail.  Giving me an endearing look, unusual for a person in her position, she told me that, due to my indigent circumstances, she would wave all fines and give me 10 hours community service and 90 days probation (which would be erased on completing the community service).  I was astonished that was all the sentence I got, and my dad and I left smiling.

Now I'm back in Moab.  A guy named elf Pavlik, who recently started living without money in Germany, decided to contact me and other folks in the world who are consciously living moneyless, and have a kind of "cyber conference" this Sunday.  Hopefully I can get it to work on my end with a borrowed computer.  There are 3 moneyless folks in Germany (Heidemarie, elf, Jurgen), 1 in England (Mark), 2 in South Africa (Adin, Sonja), maybe another new-comer in Brazil, plus the Dutch (Benji) and German (Raphael) dudes who are hitching moneyless around the world (now in South America, I think with their 2 girlfriends who've just joined them), and 2 of us in the US (Roy and me).  I hope we can pull this off.  It's getting scintillatingly exciting.