I'm in Slab City, California (near the Salton Sea).  It's been weeks since I could get onto a computer.  I'm not sure when I can do Internet again, so don't expect comments or replies from me.

Isaac, Jen, and I didn't have much success finding a boat to Hawaii.  Yachts & sailboats rarely go to Hawaii this time of year, and port security for freighters is way too high to even get near a port much less into it to even ask people.  Everybody we talked to was pretty clueless.  It's probably worth trying again in warmer months.

Both Isaac's and Jen's families wanted them home for Christmas, so both families bought them round trip plane tickets back to Illinois.  They want to return to San D after the holidays and, this time, hitch south to Costa Rica (and maybe hookup with our friend Aaron on his farm there).  I don't like San D and didn't want to wait around there, plus I feel the risk of hitching without ID, much less passport, past the border just isn't worth it right now. 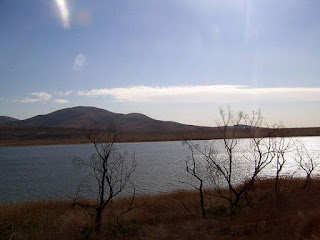 So I started walking east, through miles upon miles of mcmansions in Chula Vista (a SD burb).  I thought I'd see if I could make it back to my parents' by Christmas.  But the rains and wind hit, and I hunkered down in a baseball field bathroom "foyer" for 3 days until the rain sort of passed.  The next day I started walking and came to Lower Otay Lake.  I was absolutely overjoyed to finally be out of the city and hit the beautiful countryside.  But it started raining again.  Border patrols were everywhere, and a man and woman stopped to see why in the world I was walking in the middle of nowhere in the rain, 4 miles from the Mexican border.  The woman seemed way too serious, but the man was friendly.  He seemed like a classic, young, idealistic military type.  He said he thought my living without money was "cool".  They told me where a campground was miles up the road, and took off.  Then they screeched a u-y and came back.  The man asked if I wanted a ride to the campsite, and the woman seemed annoyed at him.  He told me there were hot showers there.  There was a shelter there which I stayed in until the rain subsided.  Then I found a tree outside the ground and set up my hammock high in its branches.  And I went into the campsite and took a hot shower.  Thought I was in heaven.  It rained all night and I got kind of wet, but stayed warm.

I walked further until I found a creek and a bridge.  I camped under the bridge.  The sun finally came out so I could dry my bag and wash my clothes.  Border patrols were everywhere, watching my every move.  But they were all super friendly with me.

I decided to hitch up Honey Springs road, more away from the border, than Highway 78,  A man picked me up right away.  I asked him what day it was and was surprised to learn it was Christmas Eve.  He was really kind and took me way out of his way to I-5.  He gave me a burrito, too.  Very few cars were going east on 5.  One man with "Jesus" and a big fish on his TShirt stopped and handed me $10.  I then decided it would be better to hitch the road crossing under I-5, and found out it was highway 78.  It was the road going north to 79, which heads to the Salton Sea.  I had had it in my mind days before to go that way anyway, so this was working out!  I'd heard Slab City was that way, so maybe I could check it out.

Hundreds of cars passed me by.  People have more important things to do on Christmas Eve than practice the teachings of the one who's birth they celebrate.  Finally a couple Jehovah's Witnesses (who don't celebrate Christmas) stopped and gave me a ride, going way out of their way to the town of Julian, but preaching my ear off in the process.  I was told it was going to rain again, and my tarps were leaky, so I hunkered down at an awning at an elementary school.  I found lots of apples in Julian, and lots of good food thrown away at the school.  The sheriff kept watching me, but didn't seem to be bothered I was staying around the school.  It rained crazy that night.  But the sun came out on Chrismas and I started hitching again.  Hundreds of cars passed me by that day until a 70-something man named Fred stopped.  He said he thought I was a Pacific Trail hiker.  He asked me what I did, and seemed extremely irritated that I lived without money.  I actually appreciated finally meeting somebody willing to tell me that to my face.  Hundreds do it anonymously on the Internet, but few to my face.  That's what I like about old people, they often speak their heart.  Anyway, we discussed it and went round and round with my philosophies until he started getting what I was saying and doing.  He then got really friendly and we enjoyed each others' company thoroughly.  He told me about Slab City and Salvation Mountain and Leonard Knight (who created the mountain).  He took me all the way to Brawley. 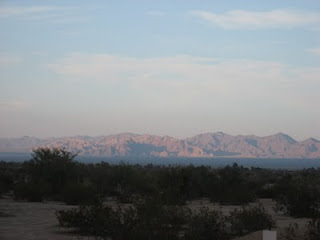 I dumpstered some food there, and a couple stopped and handed me a delicious Chinese dinner-to-go.  I started walking up hiway 111 toward Slab City.  There were lots of feral date trees, and a fig tree, so I stocked up their fruits.  I found an abandoned warehouse and slept there in my hammock.  The next morning I got a ride right away from a woman named Helen.  She took me to her home town of Nyland.  I started walking to Slab City from there, and a super nice Slab resident named Evergreen gave me a ride in, and introduced me to some folks.  A woman named Karen showed me a place to camp near here little trailer.  We've quickly become good friends.  I've met some good people here so far, and am glad I'm here.  It's nice to rest.  I'm clueless how long I'll be here.  Maybe until the winter passes.  I had no plans to be here, but here I am.  It's a strange, funny place, and it's growing on me.  I met Leonard Knight and his Salvation Mountain, too.  A beautiful spirit he is. 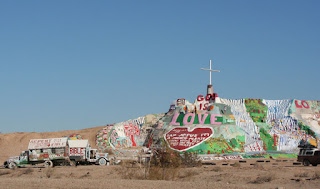 For days I felt really lost and disconcerted.  But, deep down, this is state of mind I so wanted to experience.  It's a beautiful thing, believe me, to find yourself in a position of being totally lost, discouraged, and full of doubt - ready to throw in the towel on everything; but, then, to take those feelings and sit with them.  Find out where they're coming from.  Hand them over to God, if you want to use that lingo.  Then watch the infinite Peace come.  It's absolutely splendid.  I've been getting into the Baghavad Gita again, and seeing again its shining splendor.  For me, it shines light on Christianity, revealing it's deeper mysteries, rather than diminishes it.
Posted by Suelo at 12/31/2010 02:18:00 PM 19 comments: