I was getting a few complaints about this blog being hard to read so I finally changed the template. I changed my anarchist black and slipped into something more comfortable.  Let me know if anybody still finds it hard to read.  [10:33 pm Dec 10.  Okay, I read the comments below and changed the template again, and I can keep changing it if it's still hard to read - no prob.  (This house computer won't let me put comments below)]

I also added to and revised the Frequently Asked Questions (FAQ) on the website, and posted there the media myths thing I blogged about last time. There are still more FAQs I want to add, when I get time.

What a surreal last few weeks this has been.  Cody just hitch-hiked out of Moab to the Salt Lake City area to visit relatives.  This is the first in weeks we haven't been together.

Cody and I camped up at the cave, as well as in the near-town camp, until I began a house-sit at my friends', Deb and Ray's, over Thanksgiving.  We threw a nice Thanksgiving bash, cooking up salmon and fresh cuisine a la dumpster.  I baked a couple apple-strawberry pies from scratch and some dinner roles.  And my parents joined us all the way from Fruita, Colorado.  Brer and Haila and their baby Veda came, too.  My old friend Damian popped in, too, along with my friend John from Provo.  I got to see Damian's mom, Louise, too, after not having seen her for a few years.  A grand and happy time was had by all.  My parents definitely lit up the party, and I was glad they loved my friends and my friends loved them.  I must say it's great to have parents who are proud of their vagabond son. 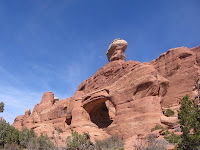 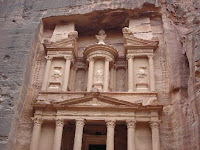 That's an arch at Klondike Bluffs, on the left, that we hung out at and sketched. On the right is Moab - downtown I think - although it doesn't look too familiar for some funny reason... oops... I guess that's Moab, Jordan!

And then freemeal!  Every day at noon!  It's Moab's hub of freaky fun and palate pleasing.  My friend Auggie bottom-lines it, and my friend Michael has been cooking a lot for it, lately.  All the food at freemeal is food that would otherwise end up in the garbage.  It's leftovers from the schools, restaurants, stores, and various and sundry other spots.  It's usually quite delicious and nutritious, even gourmet sometimes, but totally shwaggy and greasy at times, too.  And you couldn't ask for a better host of company.  It's not just about hunger for food, but hunger for free community.  It crosses all class lines, and you don't have to pay for the right to sit your bum (pun intended) down and hang out.

After Deb and Ray's house-sit, Cody and I camped out again a few days before I had to start another house-sit at my friends Phil D and Anne's, along with my co-house-sitter and good friend, Phil B.

As I said in the previous blog entry, people ask me to house-sit.  I never ask for house-sitting or seek it out.  I often refuse it when I feel the need to be in the wilderness.  This house-sit lasts for a couple months, so I'm hoping to take advantage of this time to write.

"Do you love anybody?"

Brer, Conrad, Cody and I had a big jam with didgeridoos, xylophones, the piano, drums, and our voices a few nights ago.  It was a kind of going-away jam for Cody.  It was beyond splendid.

The next day I got an email from a stranger simply asking:

"Do you love anybody?"

I started crying.  Yeah, strangely, it came the day Cody hitched out of town and I missed him terribly.

I told Cody he can now tell everybody that he came all the way to Moab and caused me to fall crazy in love with him.  Just when I'd thought I was immune to all that. Totally unexpected.  It's a grand test of whether or not my life conforms to my own philosophy: Love and Possession - Sex and Money

He's got a beautiful girlfriend back in Colorado he is madly and faithfully in love with, and he is young enough to be my son. In other words, I'm trying to pick up my heart weighed down by crushing, unrequited, romantic love.

On the other hand, this is exactly what I need, to learn divine love that goes beyond romance, beyond male and female, eternal. This is what he and I have mutually, and it gives me unspeakable peace.  This divine compensation makes all other loves pale in comparison.

Romantic love is blind. Real Love is crystal clear vision of All Reality. Romantic love believes what it wants to believe. Real Love sees what is. Romantic Love comes and goes and breaks your heart. Real love never fails, through thick and thin. Real Love is Eternal. Real Love is often hidden under and obscured by Romantic love, and (if you are open to All Truth) is revealed when romantic love collapses and the heart shatters. Real love makes no distinction between male and female, old or young, ugly or beautiful.

Yeah, I don't think it's just me.  My male and female friends can testify that an angel came to town and caused lots of people here to fall in love with him.
Now, on with life.  The night after Cody left, Brer and Chris spontaneously came by the house and whisked me away to another jam at Conrad's house.  It was absolutely splendid.  Exactly what I needed.

Now life is quiet again, sort of, I think, and I am mulling over what to do with these splendid gifts I'm being showered with, mixed in with my aching heart.  I always did like bittersweets.
Posted by Suelo at 12/10/2009 04:33:00 PM 79 comments:

There are lots of other myths floating around the media, but these are most common now.

Again & again, I keep recommending people read the FAQ in my website before making assumptions. I've tried in recent years to make my life as much an open book as possible, & to make investigating the facts about it as easy as possible. But folks still assume & insist on stating their assumptions as fact.

Hopefully I can get back to some real blogging now.