I just crawled out of the Gila wilderness in southern New Mexico, living with a primitivist (I'll call him "M"). Now I'm at a computer in a little public library. Culture shock.


Funny, the first woman I met in Silver City, at an Indian music kirtan, knew of M & his friend with the burros. Then the guy who gave me a ride here from Silver C knew M personally, & directed me to his camp!


M is a guy my friend Prema (formerly known as Gillian) has been wanting me to meet for a couple years. When I finally met M, I understood why Prema so wanted us to meet. I think I didn't really come to learn new skills, but to understand his spiritual presence. And he has a deep spiritual presence - quite astounding.


M is 40-something, soft-spoken, & lives with more grace & light-footedness than most if not any body I've ever met. He is the epitome of patience & living in the present. He doesn't seem to give a hoot about religion or consider himself on any spiritual path. That's what makes his path pristinely spiritual, in my eyes. His camp is pristine, like a Zen temple. And everything he makes is a total work of art. M is gradually replacing everything he brought from civilization with what he makes himself from his local natural environment. He makes his own gorgeous pottery & fires it at his campfire. He makes his own cordage, weaves beautiful baskets, made his own shoes, built his own bow & arrow, his own hut, table, chairs. The list goes on. Everything he does is to perfection - perfection in the way that Nature, not Babylon, defines perfection.

But M is new to the area & isn't any more skilled at living off the wild land than I - as far as eating goes. So I didn't learn much new skills in that area & was pretty much on my own.


M has close connections with an "intentional community" across the river, though he is not a member of it. He shares farmland with them and grows his own grains (wheat, rye, millet) which he harvests by hand. He is super generous & was always giving me food. His cooking is a work of art, too. What isn't? 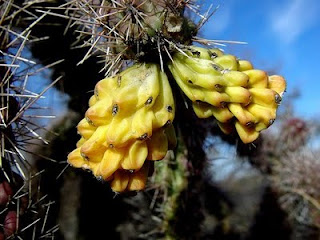 I myself ate only wild edibles quite a few days, and I must admit I've lost a lot of weight. It's a good thing. The beginnings of my mid-aged paunch are now gone. I've eaten lots of mesquite, some honey locust, wild grass seeds, cholla (starchy cactus fruit) rattlesnake, fish, amaranth greens (seeds not ripe yet), acorns (the kind you don't have to process), black walnuts, & berries (I forget the name).

Trials
The bugs are relentless down there: mosquitoes, chiggers, ants. That's been the hard part. The heat gets pretty bad at mid-day, but frequent river-dips remedy that. And there have been short, cool monsoons in the afternoons.
This all exacerbated my bouts of chronic fatigue. Yeah, bouts of extreme fatigue have been my little trial for decades (& living moneyless hasn't made it magically disappear). But it's my Teacher, & teachers stick around until our lesson is done.

Into the Wild Gila River
M's friend (who also seems enlightened to me, though I didn't get to know him much) told us about droves of acorns way up the Gila river. So, a couple days ago, M & I took a trek up to find them, camping overnight. I was a bit concerned, because I really had little food & not sure I could do it all in my sandals. But I didn't say anything. I just kept reminding myself that "all these things shall be added unto you" if I not worry. Besides, we were heading to the alleged "abundance of acorns". So off we went.
I found tons of super-sweet mesquite pods & chewed them the whole way, feeling not a bit of hunger. My sandals held up well, but my feet were pretty scratched up by the time we reached our destination. There was an abandoned camp ring there, &, lo & behold, a pair of perfectly good boots hanging, just my size!

There were lots of oaks, but all the acorns were gone - eaten by critters in the desert competition. That evening I toasted a few wheat berries M had given 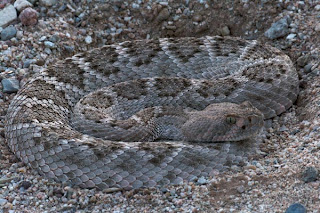 me days before, and a bunch of grass seed I had collected. I also ate lots of mesquite, again. And I pulled out a fishing lure I'd found & caught a fish. I felt great. In the morning, M insisted on giving me cooked rye cereal, which he had too much of. I had boiled a sweet milky syrup from the mesquite & carried it with me. We headed back. I came across a rattlesnake, knocked it in the head with a rock, & ate it. Rattlesnake has a texture like, & tastes like, calamari (squid), and peels off like string cheese.

Night Visions of a Dragon
The trek was incredibly gorgeous & wild. That night we camped I felt high, 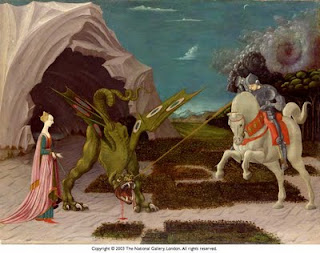 sleeping sporadically, interspersed with amazing dreams. New revelations were coming in the wee hours of the night on charging interest & world religions, believe it or not. Everything nature produces is interest bearing - an observation I've tried to avoid thinking about in my opposition to banking. But now the answer was crystallizing in me, and the idea of interest in the Torah, as well as the idea of Yajna (sacrifice) & renouncing the fruit of action in the Bhagavad Gita & Upanishads,& how Jesus often uses the word "lend" rather than "give" in his teaching. It's blowing me away.
But there is also something quite frightening about all this. We're getting to the Heart of the World Dragon, and do we dare stab it? I realized then I had to move on out of our wilderness refuge & go back out & help deal with the Dragon. Part of me is really reluctant, & part of me is excited to no end, & kind of scared about what's happening.
Posted by Suelo at 8/19/2009 12:35:00 PM 51 comments: