Happy Spring Equinox!  It's finally warming up!  The sun crossed the equator at 11:48 pm last night and I spent it around a fire with good friends a couple houses up the Colorado River from my house-sit at Roberta's & Michael's.

I haven't house-sit much this winter, staying mostly at the canyon cave.  I sometimes crash at the warehouse of  my friend, Val (Moab's teepee maker). 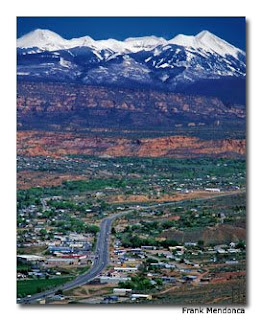 I feel a grand sense of community in Moab this time around. A growing freegan spirit is happening. One example: my new friends, Brer & Haila, have gotten Free Meal going (based on the Food Not Bombs model) - free food for anybody. It has created new community, real people, love. No club or organization can create such realness & friendship like simple, free food. True Communion.

It was a colder winter than usual, but the cave was quite warm!  Lots of folks think I'm totally hard-core caving the winter way up the canyon.   Most the "caves" up that canyon are really alcoves, the beginnings of arches, & I've stayed in those in the past.  But presently I stay in an actual cleft in the face of a cliff, going back about 20 feet, 5 ft wide & a 5-foot high ceiling.  There are Anasazi petroglyphs nearby, even one of a pushmepullya big horn sheep.  The cave is south-facing, high on a ledge, a natural solar collector.  I could often sun-bathe naked there in January even as Moabites below shivered in their boxes.  And I rigged a little wood stove from a large tin, with tin cans for a flew, for cooking.  It's efficient.  A couple sticks cook a meal & make the cave blazing warm.  And at night I put plastic over the tear-drop-shaped opening.  I really haven't even had to use the stove for heating.  I never had to get totally into my sleeping bag all winter long.  My coldest times this winter were at house-sits in town.

I have a pack-rat neighbor in a cave above me.

And a few weeks ago there was a newcomer in the neighborhood - a ringtail cat!  He's probably the reason I haven't been plagued by mice all winter.  He actually tried to move into the cave, making a den in a back cubbyhole while I was gone for a couple days.  I discovered him in the deep of night in the cave making noise, & was relieved to find he wasn't a packrat.

But after we had a stare-down for a few minutes, I reluctantly shoed him out of the cave.  If he didn't leave token turds & pee puddles, I'd accept him as a room-mate.
I've also had canyon wrens try to move in.

Ah, the feeling of hearing the melancholy canyon wren song heralding in the rising sun!

Some of my other neighbors are chipmunks & rock squirrels, spiders, scorpions (quite harmless), sand lizards, and, unfortunately, a few blood-sucking kissing bugs.

And there are bob cats, coyotes, & a cougar that make their rounds, leaving tracks.  Only once did I ever see a bob cat and a coyote up there, but never that stealth cougar.  And I spot pygmy owls, hawks, occasional golden eagles, & of course ravens.
Oh, yeah, a colony of honey bees moved into a mini cave right above mine, too!  They're just awaking for the spring. And there's a colony of fascinating ground bees nearby, too!

Ah, the perfect balance!  Everybody freely eats and is eaten, freely gives and freely takes.  Everything is peaceful, even the violence, because nobody worries that somebody else has it better or worse than themselves.  The violence I witness doesn't eat at the soul like the violence in civilization.

See the fundamental of life hardly anybody notices:  Everybody on earth gets energy from the sun.  Everybody, the just and the unjust. Even the energy running this computer comes from the sun.  And the sun demands nothing back.  Nothing.  All energy is totally, freely given - that is, until it falls into human hands! 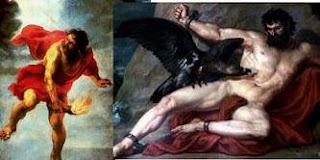 That's called Stealing Fire From Heaven, the  universal myth describing what separates us from Nature, makes us fall from Balance.  Our unique ability to control fire symbolizes our unique control of Credit and Debt. This is the Fire Serpent, the Trickster Seraph who brings consciousness of Credit and Debt. He's called Promethius (Forethought) with his twin Epimethius (Afterthought). He is Ego, who dwells everywhere but in the Present Mind.


We've become thieves - ungrateful, stingy, possessive, control freaks. Why have we forgotten that everything we get is gift, that by Chance we are blessed? As even the Bible, worshipped by the self-righteous, says:

"The race is not to the swift,
Nor the battle to the strong,

Nor bread to the wise,
Nor riches to men of understanding,
Nor favor to men of skill;
But time and chance happen to them all."
(The Bible, Ecclesiastes 9:11)

"The dice are cast into the lap,
But their every decision is from Yahweh."
(Proverbs 16:33)

And fools indeed are those of us who, by CHANCE might be intelligent or wealthy, and have the gall to look down on others, calling them moochers and parasites! 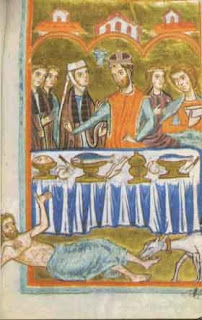 Get this: our ingratitude has gotten so comically absurd we even bottle water and sell it, and we EVEN lock up our trash bins so no hungry urchin dare snatch even a crumb falling by chance off the table of our Slave Trade!  And our Taskmasters (our Politicians & Religious Leaders & Business Leaders) have the gall to call us free!  Why don't we get it?  We insist we can finally balance everything with our our control games, our money, and we just can't.  Not ever.

I say "we" because we are all partakers, and nothing will ever change if we don't take responsibility for our actions, not somebody else's actions. The illness of one cell is the illness of the whole body.