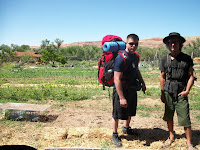 The day after I re-entered civilization from my soul-searching retreat in the canyon a few weeks ago, a dude named Roy showed up in town from LA to begin a life without money.  He was determined to come, and his determination and positive attitude has inspired me to no end!  And my feeling weak these days is totally good, to remind me that if anything is taught, it isn't from me.

He even started a blog about all this.

The uncommonly common amidst uncommon uniqueness 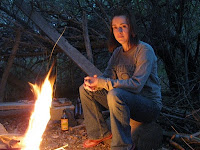 Like Carolyn, Roy has something deeply unique and mysterious about him.  But unlike Carolyn, who has a demeanor of calm patience, Roy has an exuberant, go-getter personality.  All the folks who have hooked up with me so far have been tantalizingly different from each other and from me--both the newcomers into town and my local friends already here.  Yet there's a certain commonality among us all that intrigues me to no end, that I can't put my finger upon.  It's bare, raw sincerity--yes, I think that's it!  Usually, when we look for friends, for people to love, we look for people just like us--you know, like in dating services.  But what blows me away now is how we all are so different, and yet we have an indescribable love for one another.  It's a commonality beyond understanding. 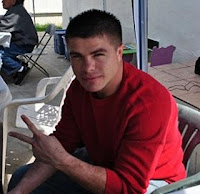 If anybody should have a book written about him...

Roy's life fascinates me to no end.  He is straight out of hard-core, LA Latino culture; he was a fitness trainer, a military man, then a professional poker player, before coming here.  While in the army he had a spiritual epiphany and became a pacifist, getting himself out of the military against all odds (being disgraced by his military superiors and peers).  He then made easy money from poker, and, by all appearances, "having it made," he found himself gliding up the economic scale, feeling like he'd never have to really work again.  But he realized he felt unfulfilled.  He did what virtually any other person would never dare to do:  he decided to give it all up, give up all his money, his car, his house, and he came to Moab.  On top of that, his parents drove him to Moab all the way from LA, and basically gave him their blessing.  How unusual is it for parents to do something like that?   They hugged me as they left.

Roy is a challenge junky and a genius and is driven by a divine wisdom that I've rarely seen so clearly in a human.  He blows all stereotypes and astounds me. 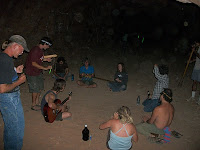 The past week-and-a-half that Roy has been here has been packed with fun.  The love and hospitality of my friends has shone bright as the sun.  We've gone to a few parties, including a couple jams, some hikes, and the community of Free Meal.  Here's a pic of a going-away jam for Aaron and Amanda (they just left for Costa Rica).  I'm usually not such a socialite.

Roy was prepared (and hoping) for some hard-core survivalist living and random challenges, and discovered that my Moab life is pretty cush right now.  This is the first summer I haven't left Moab and haven't wandered the US since I gave up money, I think.  It's when I'm on the road that the magic of random blessings happen most clearly, as well as trials taking me to my wits end (Usually the magical random blessings happen right when I'm at my wit's end).  Of course, this is what appeals to a young person like Roy, wanting to be baptized into the heart of life.

I was considering hitting the road for Roy's sake, to give him a taste of the magical roll of the dice.  But I have a couple obligations keeping me here this summer, and I have to be here early October as well.  I've been using this summer to hang out, develop community,  farm, meditate, and write--taking a needed reprieve from years of past summer wandering.  We were talking about hitting the road in late July, train-hopping and hitching for a few weeks,  coming back, then going to the west coast in later October and trying for hitching to Hawaii.  But Roy was itching to plunge in now before the Hawaii plan.

So Roy, in his spontaneity, decided to put on his pack and hitch-hike out of Moab this morning, wander around the US, with zero money, for maybe 3 months, then return in October for our next venture.  It seems right he go through this baptism by fire first.  His teacher won't be me, but the Laws of Chance, otherwise called the mind of God.  He has the perfect attitude for it.

Love through the fires 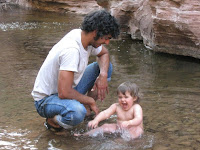 Meanwhile, there've been other things I've been processing.  Before Roy came, I went through some way hard, humbling stuff, as I alluded to in the last post, and some of my best friends witnessed me at my weakest.  Such things either make or break friendships.  Hmm, I think I must say that my friends', and especially Brer's, highly noble character has shown through all this, as his light shines through everything.  Oh, yeah, that's him and his daughter, Veda (I don't think I've ever before witnessed a human who savors and unabashedly celebrates life as she does.  It's astounding, in fact).


I added another FAQ to the website (#31. Why are you an extremist? Shouldn't you follow the Middle Way between extremes?) and hope to add other writings.