Still a Peddler Peddling Nothing

I'm in Olympia, WA right now with my friend Julian. Yeah, I'm still peddling a ghetto bicycle around the northwest.

PORTLAND TO REDMOND TO PORTLAND

An interesting past couple months it's been.

In mid-August, I bicycled from Portland to Redmond (on the eastern slope of Oregon) to visit my friend Timo (who was my Peace Corps neighbor in Ecuador way back when) and his daughter, Logan, then peddled back to Portland. This young couple, Renee & Zach, emailed me & decided to stay with me for a couple days in Portland to get a little taste of this lifestyle. It was kind of a fiasco trying to meet up with them, but I was glad they were persistent and finally found me. Really sweet kids. I enjoyed their easy-going presence & ability to listen. They wanted out of the city & probably would have continued with me longer had we escaped to the wilderness. Maybe they'll hook up with me again in the southwest desert canyons.

Right after that, Julian & I decided to bicycle to Seattle for a few days. I've been wanting for years to visit my friend, Irv, there, and now was my chance. Irv is an 81-year-old man who walked away from his conventional career and life in his 40s and started doing things like hitch-hiking around the country up till only a few years ago.

What attracts me to him is that he decided to walk away from it all later in life, like I did. That's what I like about Peace Pilgrim, too. It's not a youthful flight of fancy to try until settling down, but a way of life.
Very encouraging getting good advice and confirmation from Irv. Here's a man in the last season of his life who will still tell you basic trust in the law of nature is the essence of life. Give up control & everything you need will come to you. He likes to call it providence. Though they are vastly different than Irv in most ways, both my parents are also 81 and will tell you the same, in a different language: have faith and you will be provided for (Little did they know this would drive me to this vagabond lifestyle!).

Irv has several things on the web, but here's a good start to get to know him a bit:
The World of Irv Thomas

OLYMPIA, MOUNTAIN OF THE GODS

Julian and I have been taking our time peddling back to PLand. We have also been getting a lot of flats, and my rear spoke broke. Just yesterday we decided to venture into the streets of Olympia to find a discarded bicycle wheel to snag a spoke from, then find somebody with a tool to remove the free-wheel so we could install the spoke. We hardly knew where to begin. Lo & Behold, just as we started down a residential street, a young man named Lance called out to us, asking if we were on a bike tour. We stopped to talk. Then he opened Door Number 1, his garage door, and, like magic, it revealed a plethora of bikes, parts, and tools! He said he's going to open a bike shop. He gave us a spoke from another wheel & lent us tools. Synchronicity, again and again. And I avoided using bicycles in the past because somehow I didn't think faith could work so well for biking moneyless the same way it works for walking & hitching. Silly me.

Lance then invite us to a show last night, with a couple punkish bands. There was even a slam-dancing mosh pit, which, just a few years ago I would have jumped right into, but somehow it didn't feel so appealing last night. Sign of my age. It's actually fun & comforting watching younger humanoids take up the baton of crazy young energy as I stand on the outskirts. 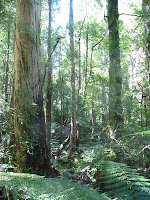 Julian & I have been camping in the woods near Evergreen College (where I'm using this computer). Julian is an idealistic anarchist-sort of chap, not even yet 21, who likes the idea of living moneyless. He's so easy-going it's nice traveling with him. He plans to keep heading southward after Portland, maybe as far as Baja California. He's been doing this whole trip on a fixed-gear bicycle! He's been keeping up & even passing me with my 10-speed, no prob. Hard-core.

Last night we got word of an Equinox party at the "Nuthouse" here in Olympia. We went & heard amazing music & poetry from several bands & performers. We were totally welcomed to stay the night and given food generously, and even invited to stay indefinitely. It's tempting to take up the offer. I've fallen in love with this Olympian Pantheon & feel it will be on my migratory route, now. Julian has decided to stay here for a bit, but I gotta bike on. I want to meet my friend
(I)Anok (yep, that's how he spells it) on Sunday in Portland before he leaves, so I have to haulass. So it's solo Suelo back to PLand.


Unusual views of society, economics, theology, & nature keep coming to me, but I resist writing them here now, to keep this short. This life is often so exhilarating, in between my many quiet, non-eventful, sluggish times.
Posted by Suelo at 9/19/2008 05:22:00 PM 5 comments: