Our Problems Are Make Believe

I just changed the name of this blog. Gotta change labels once in a while. Clothes get stinky if you don't change.

I decided to move out of my squat in an abandoned building in the town area and to set up camp in the wetlands, when I'm not in the canyon cave. It's been glorious. But today I took a step down in glory and have started a new house-sit, which means time to infect the cyber-world with more viral musings.

As you read on, don't get me wrong. As I point out the absurdity of religion (I'm doing nothing genius, because it's so obvious), know that at the core of religion is the most profound truth (not so obvious).

A couple weeks ago, I saw the movie Blood Diamond at a friend’s house. Really violent.

War, bloodshed, poverty, and anxiety – over what? Make believe. Imagination.

Blood Diamond shows that the value of diamonds is somebody’s make-believe. Some corporate trickster decided diamonds are valuable. Now we fight over this thing that nobody can eat or use or enjoy.

We worship images of silver and gold and paper, images that cannot hear, see, smell, taste, or speak.

And we become what we worship: deaf, blind, sterile, tasteless, speaking nothing but hot air.

Idolatry of Words and Numbers 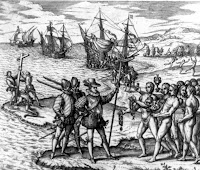 Over 500 years ago, when Columbus and the Conquistadors invaded this land in search of make-believe (gold), killing and conquering for it, the natives asked, “We don’t understand white man’s obsession with this yellow substance nobody can eat or use, except as petty trinkets.” And these Europeans put the label of “Jesus” and “Christian” and “Bible” on their bottle of 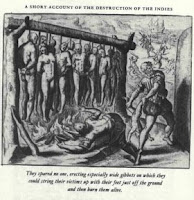 greed. To this day, these labels still make us swallow this bottle’s poison pills. We tack the whole Bible onto our poison pharmacy, and the masses swallow it and the masses get sicker and sicker.

Our wars, our genocides, our anxieties, our mental illnesses, all come from our make-believe.

"Joe is worth two million dollars," we say. That makes Joe worth more of our time than, say, Fred on the street who is penniless, though we know absolutely nothing about either Joe's or Fred's character. "Akhmed is Muslim," we say. Already we see him as an antichrist, though we know nothing of who Akhmed is. Names & numbers.

Imagine if we saw people as people, not as words or numbers, not as creeds. Imagine not imagining, but seeing!

I was raised to see everybody as sects and denominations. The first thing we learned about people was their label. When we moved into a new neighborhood in Denver, we immediately learned the family across the street was Catholic. Already we knew they were likely headed for hell, and we told them so, regardless of what decent people they were. “People are saved by faith, not works,” was always the answer to the question of why decent people go to hell. Gandhi was going to hell because he didn’t use the right vocabulary. The fruit of his faith mattered not. Faith, in our minds, meant words: labels, not reality. We learned the woman next door to our Catholic neighbors was a Wiccan. Way creepy label! Definitely gonna burn in hell! Even our Catholic neighbors agreed. We never found out more about her, because we wouldn’t go near her house. I had aunts & uncles who called themselves atheists & agnostics. We hardly ever saw them. I envisioned them with invisible horns. When I got to know them years later, I was astounded how much more Christ-like they acted than we. They never talked about how evil everybody else was like we constantly did. Their lives weren’t constant witch-hunts like ours were. Their secular Christ-likeness threatened my faith, my trust in words, labels, images of the mind. Their realness threatened my whole world, world of imagination, idolatry.

I was curious the other day about what separated Eastern & Western Christianity, so I looked it up. A main factor was three simple words,

“and the Son” (called the filoque clause ), in the Nicene Creed! The Western Church made it part of the Creed, and the Eastern Church did not. These three words caused major battles. Make believe. Idolatry.

We still don't get it. We've forgotten the sublimity of monotheism: Worship only one Name, the Name that can't be named. Cling to only one Word, the Word which can't be spoken. Name above every name, Word beyond all words. We've replaced it with a monotheistic idolatry, which spews bigotry & kills everything it touches.

In the Image of Satan

Once in a while, somebody comes along and shows that words and numbers are okay if we stop idolizing them and see them for what they are: imagination. Imagination is fun, when we know it's not real. These folks bridge the gap between imagination & reality, bringing the joyous luster to life again. They take the costume of myth off of the ancient dummy and clothe it onto Living Reality, imbibing myth with life. They have fashion sense. Like rain on dead earth, they infuse long-dead scriptures with new life, or else they move beyond scripture. The possibility of fashion is endless. They confess the Word become Flesh in the Now. They are called sages, prophets, seers, mystics. But they are, ironically, the great threat to the old religion whose language they speak, because they strip the hollow dummy and show it for what it is: an idol.

Babylon comes tumbling down, because there is no more imaginary Satan out there for her to fight against. World civilization doesn't want you to know life is meant to be joyous. World civilization wants life to be addictive, seductive, a continual striving for a future reward that never really comes, which I call the siamese twins of money and religious dogma.

My friend Phil and I were once talking about our religious upbringing, and he said something profound: “Satan is the whole reason for existence for Fundamentalism, whether Christian or Muslim or whatever. If you question Satan, Fundamentalism goes more ballistic than if you question God. Why? Because if you take Satan away, Fundamentalism knows it will vanish. Satan is its faith.” Take away our labels and numbers, and there is nothing more to fight – nothing but a hollow dummy.
Seeing Satan within rather than “out there” brings us to our knees.
[It's kinda eerie, but after writing this blog entry, i had the weirdest hunch to look up Bright Eyes' Conner Oberst because I felt he'd have something to say, & this was the first video i found. I had no idea this song or video existed. Pretty astounding how perfectly it fits, huh?]
Words & Numbers Becoming Aware of Themselves
Hmm... my great confession: this blog entry is a fight, is it not? Words & numbers are battling, and we humans get in the way, take them so seriously we think they are us, and we battle side-by-side with them, get angry and hate each other over them. Our words become sticks & stones. Words are judgements & are judged. I say this because I have gotten into arguing over ideologies the past couple weeks and realizing there is nothing beneath but a hollow dummy.
Posted by Suelo at 4/20/2007 03:53:00 PM 5 comments: Links to this post