Are There Any Good Reasons For Blocking Ports?

I'm stepping out of my usual again, because this is very critical.  I'm bracing myself to disappoint or lose readers.  Okay... take a deep breath and click "publish"...

If your daughter is being raped, you're not going to talk spiritual platitudes or go away and pray, you're going to act.  And your previous spiritual development will give you power to act well.

There is a time to silently sit in lotus position in the womb, and there's a time to be born with a cry.

I'm going to present the arguments for and against blocking ports, and you can make up your own mind.

Here's Why People Are Pissed Off at the Port Occupiers:

Lots and lots of people, inside and outside the Occupy movement, are intensely pissed off at those Occupiers who blocked the ports.  Both liberals and conservatives, leaders and populace, are pissed off at port Occupiers.  I got into a heated discussion with local intensely-pissed-off Moabites about this.

Yes, people say the Occupiers usurped the position of the unions, and that working-class people, including union workers, are the ones now suffering from the Occupiers' actions, not the elite 1%!

And people are saying the Occupiers are young, foolish, privileged, egotistical, not understanding what it means to make a living, support a family.  They're accused of getting support from mommy and daddy and government, and now biting the hand that feeds them.

Here's Why People Blocked the Ports:

Step back and look at the big picture.

A country is doomed if it depends on imports, not locally sustainable--not to mention our earth's ecology is doomed. Corporations have outsourced jobs and goods. Such corporations must end if our country is to survive.

But such corporations have us by the balls. Yes, the livelihood of our dockworkers, distributors, merchants, as well as sweatshop slaves overseas, depend on these corporations, and vise versa. And why have these corporations outsourced themselves, colonized overseas? Because they don’t want to pay just wages or abide by just laws brought about by unions!   I’m not necessarily saying this is the union’s fault, but the fault of deregulation allowing corporations to colonize overseas.  Corporations removed themselves from the unions’ power.  How?  They lobbied (bribed) our nation’s Republican and Democratic leaders.  Our nation's leaders let themselves be bribed, because their loyalty is to money, not to truth.

But our country is doomed unless multinational corporations end.  No conventional union leadership is going to support ending their employers!  This is the dilemma. Stop the corporation, and people lose their livelihood (our own dockworkers, distributors and merchants, as well as overseas sweatshop slaves).  The union’s goal is not to end people’s corporate livelihood but to improve it.

The conventional union was a good thing when it had power over the corporation.  But now that corporations have moved overseas, the unions have lost their power.  Now the general people must act, as happened with the Boston Tea Party and Gandhi's movement.

Yeah, But Instead of Blocking Corporations We Should Create Sustainable Alternatives, Right?

Naturally, the answer to avoid this problem would be to first establish sustainable jobs here, starting with localized agriculture. But I know by experience the majority don’t have time for such hippy things, because they have corporate jobs to serve and families to feed!  A round robin!

So we’re backed into a corner. Now we don’t see a way we’re going to produce locally and sustainably except by cutting off all dependency to multinational corporations!  This will cause loss of jobs, sacrifice, suffering.  And whatever time we start cutting off dependency will never seem like the right time.

In the same way, end opium and cocaine trade, and droves of families in Afghanistan and Columbia would lose their livelihood.

Understandably, those who advocate cutting off dependency to multinational corporations are going to be tarred and feathered, imprisoned, even killed, but something mysterious makes them still stand firm. 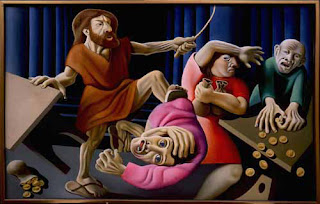 If my right arm has gangrene, cut it off.  I'm going to be way pissed off, screaming, calling the amputator names, even wanting to kill him, as the saw cuts through nerves and bones, unless I keep my mind on the health of my whole body, focused and centered.  Keeping my mind on the health of the whole body is the very nature of spirituality.  To be spiritual is to act.

"As the body without the spirit is dead,
so faith without action is dead."  --James 2:26

If somebody knows a simpler, easier way, speak it.