Back in Fruita, Colorado

I was feeling my usual disconcerted, Spring-time troubledness for weeks on end; but over the past week or so, with lots of meditation and love from friends, it has started giving way to infinite Peace and Gratitude again.

It turns out I’m back at my parents’ in Fruita. I felt a need to come here since my 82-year-old dad got a bad case of pneumonia. But he’s on the upswing now. My new friend, Carolyn, had to go back to Boulder to take a class for a few days there and dropped me off here last Wednesday. She plans to cart me back to Moab on her return next week.

So much has been happening. A few weeks ago a few folks showed up in town around the same time. My friend Mark, the writer, came back. Then I met Indigo and Ben, with the Zen Army, for the first time on the same day that a young woman, Carolyn, came to town from Delaware via Boulder. Indigo and Ben were staying and volunteering in Green River, Utah and only came to Moab for the day to do some work at the food bank and to chat with me at Free Meal. Indigo and Ben are basically traveling around the country with an Airstream, doing free work for folks. I feel privileged having got to meet them.


Who is Carolyn? She’s a 20-something who had seen my previous blog entry about Sol Foods Farm and decided to come here to work there with me for a couple weeks, starting a circuit as a kind of WWOOF-er. She wanted to later hit other farms in other states. But it turns out she hit it off so well here that she’s decided to stay indefinitely! I and my friends feel way pleased about that.
Meanwhile, my friends Jesse and Jamie rolled into town from L.A. for a few days not long after Carolyn had arrived. They are part of the world-wide Jesus Christian community. I had hitch-hiked and train-hopped up the west coast with Jesse and a couple other “Jesus Christians”, Simon and Grace (who’s since left the JCs on
good terms), a couple summers ago. I love and feel a true comradery with those guys.


What Motivates the Universe? 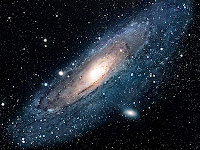 I haven’t been staying up the canyon much. I moved the near-town camp to some woods near the farm, mostly camping there. Now I can devote more time to the farm, feeling more and more like family with my co-workers. Chris and Brer are farm stalwarts, and other friends, like Haila, Riley, David, Aaron, Pete A and Jason often join us, as well as other random folks. Now Carolyn is becoming a stalwart, too. She’s been staying at my friend Pete G’s house but has recently set up a tent near mine. Brian Ballard, from an old Mormon Moab family, is leasing over 40 acres of land and letting us farm it, too. It looks like he’s got the vision, too! I keep discovering how much I love these folks more and more. Everybody there is volunteering. I mean people aren’t getting paid anything – hardly even food (since it’s too early in the spring)! So what motivates them? What motivates the entire universe to roll? Community! Nature! Community of atoms, of space, of living beings. I am seeing before my eyes people acting out the basic principle of Life talked about in this blog! Who knows how long it can last among us humans. Day by day is all we can know. Our Daily Bread. Only when it is Day by Day can it last perpetually as it does in the rest of the Infinite Universe.


We are also reviving an old abandoned half-dead orchard, pruning trees, diverting water to them. Visions are brewing of a sustainable perma-culture forest garden. Of course, not a single one of us farmers owns any of the land; it could be pulled from beneath us like a rug. But where in the infinite physical universe is there a permanent, stable place! Totally accepting this perpetual instability, this perpetual death and resurrection, perpetually born again, is the only true stability, the only eternal peace, the only Promised Land. 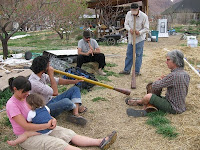 Carolyn is not in this pic since she took it. 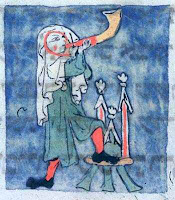 My blood-brother, Damian, and his classy German wife, Dorina, decided to throw  my 49th May Day birthday party at their house.  I felt so blessed that day – still do. It’s now my Jubilee Year, 7x7th, and I’m brainstorming like crazy about the ancient Jewish celebration of Jubilee, beginning on Yom Kippur (Day of Atonement, At-One-ment), when the Seven Trumpets are blown beginning the Year when all debts are forgiven, all land is laid to rest for the poor and for wild animals to freely eat, and possession of lands is given up and returned to communal clans.  I’m realizing more and more that Jubilee is the essence of the human purpose on earth. Hint: Jubilee is the Eternal Present, the Sabbath Rest.  Yes, it is our entire mission to enter that Rest, Today. 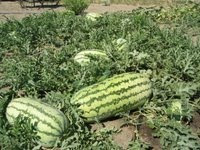 Funny, I was dwelling on this idea when I returned to the farm after my birthday. Carolyn was there planting melons.  I asked her which watermelon seeds we were planting that day. “Jubilee,” she said.  A tingle darted down my spine.