Right now, I'm at my brother Doug's in Conifer, Colorado, with Mark (the writer) and Roy. 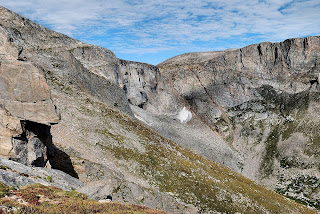 Mark took me up to Mount Evans to the spot where I had driven my car off a cliff back in 1991 and almost died.  I had discussed this suicide attempt with Roy the day before, and he let cat out of the bag in his blog to the public.  So now is the time to share it publicly.  I had wanted to reveal it in my own time, perhaps in a special website for suicidal people and survivors, but it looks like now is the time, now is the blog, as premature as it feels.  But what is, is, and the point of living this path is to completely accept what is.  I choose what is, the good, the bad, the ugly.  There is no greater liberation than choosing What Is.  Call it Submission.


I didn't really choose the publicity I've gotten.  But now that it's here, I choose it.  I didn't choose the praise and the hateful slander, but now that it's here, I choose it.  It's all a rare tool, and I must use it well, now that it's been granted me.  I've been saying for the past few months that I decided to make my life an open book, including the good, the bad, and the ugly.  Whitewashed lives are no help.  I'm telling Mark about it for his book, which is one of the reasons we came here, to see the site of my suicide attempt on Mount Evans.
My clinical depression, with its suicidalism, is a thing of the past, and my life as it is now is borrowed time, precious time.  Why not now use it to help my fellow humans out of the darkest quagmires of hell?


Please read & consider what I'm saying, and if you feel it is worthwhile, forward it to [the rest of the family]:
I'm hoping this helps you all out to tell you this. I never know how much news spreads through the family or not, and what you know about my car wreck 15 years ago, or if even I talked to you about it. 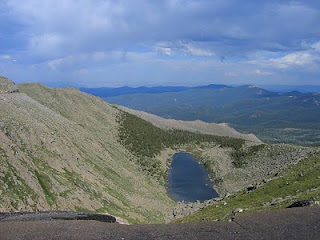 My car wreck off the cliff in Mount Evans in Colorado was a suicide attempt. I thought it would be failsafe, that in no way I could survive - but I did. And now I live to tell you about what [M's]point of view might have been. I didn't know it at the time, but I was suffering from severe clinical depression. I knew something was wrong, but didn't know it was an actual disease. One day I got up at 3AM & realized I had gone a whole month without experiencing even 5 minutes of even the least happiness, and that I was sinking deeper & deeper into a black hole, with not a single glimmer of light at the end of any tunnel, not a spark of hope. I was going weeks without sleep - except maybe 5 min or an hour per night, so my brain couldn't even function. I couldn't hold conversation, couldn't decide, and I was too tired to hardly lift myself from bed. I felt like hell was a reality, & I was in it. No matter what people said or did to help, nothing helped, nothing could help. But then I figured out a solution - finally, a solution that I thought would work. Kill myself! The idea of it was so freeing, &, strangely, and FINALLY the ONLY thought that brought me happiness!

And here's the rationalization that went through my head. The thing that had kept me from going through with it in the past was the thought of how it would hurt the loved ones around me . But I had finally reached a critical point - a point when I felt I had no more choice. I could see that all my loved ones had at least some strength to experience happiness, unlike me, and that we all die and would have to face death, of both ourselves & others. I finally had to put all of our pain in the scales, and thought that the pain I was experiencing now was way worse than even the pain my suicide could inflict on others! They could handle it, I thought, but I couldn't even now handle a moment's more pain. From my perspective then, I simply had NO OTHER CHOICE! I also felt like my whole being was in self-destruct, ready to die, like any creature that is ready to die. My brain was an organ that had sparked its last strength, just like a heart that is worn out beats its last beat. I simply could not fight it any more, could not resist death, death that we all must face sooner or later. And family & friends would simply have to deal, just as they would have to deal if I had had cancer, and just as humans & creatures have had to deal with death zillions of times over zillions of years in the past! And in 100 years all of us would be dead & gone & all forgotten anyway!


But I didn't know, until after I had been taken to the hospital, that I had an actual disease, a treatable disease. However, ironically, even though nothing anybody could have said or did could help me, I still had thought that my happiness somehow depended on people & things around me, so I was constantly reaching for something or somebody OUTSIDE OF ME to help me. Little did I realize that the problem was INSIDE ME, that I was suffering endless loops of negative thought about everything & everybody. Little did I know that if I gave up negative & judgmental thoughts, my depression would go away with them! I didn't realize that NOBODY could help me if I clung to my old thought patterns, which totally distorted my whole world view, making the universe a living hell.


After having gone through it, and found my way out of depression, I have had to assure family & friends that they were in no way responsible for my depression or suicide attempt. Nothing they could have said or done could have made it better. The responsibility was fully mine. But I also give myself slack & forgiveness, too, because, on the other hand, it was truly a disease I was suffering. It is chemical & it is cognitive. The chemical feeds the cognitive & the cognitive feeds the chemical in the cyclic nature of it.


For you survivors, NEVER even let your minds do the "shoulda coulda" thing, even for a second. That begins a cognitive disorder in yourselves, which spreads the disease. What is, is, and no amount of thinking can go back in time - so why even try for even a second? Just let this be an opportunity to love each other more deeply & more fully, more than ever before. Shoulda coulda thoughts keep our minds away from loving one another, here and now. Shoulda coulda is destructive & damning to both ourselves and everybody around us.


So there you have it.