Down with Big Government, Up with Unbridled Free Market!

Spring in Moab has been gorgeous, naturally.  I've been mostly living in the canyon caves, with a couple short house-sits thrown in.

Another "apprentice" has come to try the moneyless life with me for an indefinite time.  His name is Phil, from Indiana.  He came on the Greyhound to Grand Junction, Colorado, at the same time I went to visit my parents near there.

Phil is a 21-year-old wiser than his years and easy-going, and he's teaching me Qigong.  It's been good to get back into such practice, since I got out of practice since James started teaching me Tai Chi a couple years ago.  It is truly empowering for me.

Phil and I have been camping in a large cave but just move to a smaller one, and we're psyched about our new home.

After having acquired and shown the film "The Power of Community" mentioned in the last post, Carolyn then was able to get the new movie about Heidemarie Schwermer, "Living Without Money", and show it at Moab's library.  We had a nice discussion afterward.


Mark Sundeen, the guy writing my bio, also came to Moab about the same time as Phil.  The second draft of the book is done, but it looks like it won't be out until March 2012.  He came and camped at the big cave with me and Phil, and did a little filming for the book promo.  With the camera going, it made it feel, for both Mark and me, like the book was now becoming a reality.  A strange feeling.  There's something about Mark's personality that is strangely and uniquely similar to mine that makes this whole thing feel like another of the universe's synchronicities.

I just passed the half-century mark last Sunday (May Day).  My friends Damian and Dorina hosted a party for me at their house.  Carolyn provided the music, most of which was a fabulous mix of new dance music.

Carolyn just left Moab today and I'm missing her.  She has been here over a year and has been going through here own gradual transformation to a simpler life.  Now she is going on solitary journey with her dog, hitching to the west coast to walk the Pacific Coast Trail.  She plans to go for maybe a month, then probably coming back to Moab.

What Are My Political Views?

Maybe this can be another FAQ.


Okay, people often try to get me to talk politics, but I shy away from it.  I like to concentrate on the individual state of the heart, and feel that if we all did this, politics would work itself out.  By working itself out, I mean working itself out the door, becoming obsolete.  I guess I'm going to talk politics now, or it seems that way.  But, really, I'm going to talk about faith and the state of the heart.

I've been reading several books and thinking more about the economic and social system again.  I read most of the Anthropologist Colin Turnbull's The Forest People when I was in Phoenix, and I'm presently reading another book about the Kalahari Bushmen, The Harmless People, by Anthropologist Elizabeth Marshal Thomas, and thinking about other primitive peoples.

I've also been reading two very different views of capitalism: Niall Fergusen's The Ascent of Money as well as Naomi Klein's The Shock Doctrine: the Rise of Disaster Capitalism.  Both those books talk about Milton Friedman, the first in his praise, the second not.  The first talks about the glories of a Free Market system, with little or no government control.  This Free Market system is an ideology that drives modern "Republicanism" and right-wing "Libertarianism."  Ayn Rand and Milton Friedman were its biggest and most popular prophets.  (See My Answer to Ayn Rand)


Let There Be Unbridled Free Market!

The ideas of Republicans and Right-Wing Libertarians, and the greatest of their prophets, Ayn Rand and Milton Friedman, appeal to our human instinctual sense of faith, which is why a great majority of religious people lap them up.  This is despite the fact that Rand and Friedman were avowed atheists.


When I read the philosophies of the Free Market Capitalists, their ideas start making so much sense to me, it kind of frightens me.  Then, when I read the philosophies of the Socialists, their ideas also make so much sense to me.  But the Socialist ideas don't frighten me so much, simply because I am more biased toward "socialism", since I have seen with my own ideas the disaster caused by the unbridled capitalism espoused by the likes of Friedman and Rand.  As for religious people, the religious right loves the ideas of Rand and Friedman, avowed atheists, and the religious left loves the ideas of Marx, an avowed atheist.  Kind of funny, huh?  But notice how people like Ayn Rand, who had grown up in a "Socialist" state, saw how disastrous "socialism" was.  Perhaps I would have felt as strongly against "socialism" as I do about "capitalism" had I also been raise in the USSR.  After all, Joseph Stalin had more people massacred than any other person in history, including Adolph Hitler.


I've always felt that every ideology and every religion is based on profound truth, and somehow that truth gets lost when the ideology gets institutionalized.  I totally get it why Republicans believe as they do when I learn Republican ideology.  I also get it when I learn Democratic ideology.  Same with Communists, Socialists, Libertarians, and Anarchists.  The same goes for religion.  If you care to pick most any religion and delve into it, you will start seeing why people believe it is the Greatest Religion of All.


There is a strange Law of the Universe going on here.  To practice the Golden Rule is to put yourself into another's shoes so thoroughly you can see exactly how two "opposing" views can believe they are right.  Then you can hypothesize:  Maybe both sides aren't really opposing!  Maybe at their deepest core they are saying the same thing? We often devalue and deny our feelings, but, really, feelings are the deepest core of what drives us, and feelings are our point of agreement. 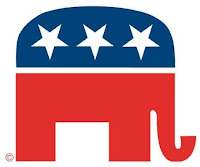 So, then, here's what I feel:  I don't like to be controlled.  Often throughout my life, I got angry when I felt controlled or when I saw others being controlled.  It was a yearning for freedom.  One thing that both sides of the political spectrum feel is a yearning for freedom, to not be controlled.  My moneyless philosophy is based on this feeling, and I use logic to communicate it.  And, yes, I grew up in a Republican household, so I can safely say I understand the Republican yearning.  I have both embraced it, reacted against it, and then re-examined it.

When I feel what right-wingers are saying, I get it.  I feel that a Free Market makes sense.  But then I see that jargon gets in the way of truth, as it also does, equally, with left-wingers.

But I like the idea of Free Market and No Government Control, but only if we apply it to all levels.  What is a Free Market?  If you understand the very nature of money (see the What Money Is and What Money Is Not) you find that the very nature of money, why it was invented, is control, manipulation of the free-flow of nature's economy, lack of faith that credit and debt will work itself out if we just let it be.  Let it be!

A Free Market is utterly impossible with money or conscious barter involved.  The only Free Market possible is Pay-It-Forward, with no thought of credit and debt.  The Great Banker in the Sky controls all pay-back, all vengeance, all "punishment" and "reward".  There can be no other just banker: no banker on earth can be just.  Nature is in balance, with its hardships and pleasures, while you can't find a trade economy on earth that can balance its budget.  Nature is the only Free Market.  This is the principle that appeals to both the liberal and conservative, our deepest nature, our deepest yearning.

All our world ideologies, political and religious, are based on profound truth.  I dare say our ideologies don't work because we don't really believe them, we only pretend to.

As far as Free Market happening in human populations, I use true hunter-gatherers as an example.  I discuss this in the website (A Culture Living Abundantly Without Money Today and Our Fall From Grace: Our Departure From Gratis:The Beginning of Money), though I left out talking about the Pygmies.  Colin Turnbull's The Forest People, is a beautiful work of art about the Pygmies, and it shows the contrast between the mentality of the Hunting/Gathering Pygmies with the surrounding Trade/Agricultural tribes.


Yes, when I talk hunting and gathering societies, I'm talking societies that don't even consciously barter.  (When you have only what you need, you can't afford to barter, because in barter, you usually have to take something you don't need off hand, because the needs are not simultaneous, as in freely giving and freely receiving).  People sometimes argue that many primitive societies are violent and far from balance, like the Yanomamo or Papua New Guinea tribes.  However, both those, too, are not true hunter-gatherers, but agricultural and trade societies.  Both those societies even have a calculated system of war trade.  In Papua New Guinea tribes, for example, if one person is killed by another tribe, the other tribe must either kill a person of that tribe, or seek trade retribution (such as pigs or other goods).  I like using these primitive tribes as examples of the transformation that happens when people take on thought of credit and debt (knowledge of good and evil), manifesting in the form of agriculture, war, domestic violence, and barter/money.  These non-hunter-gatherer primitive tribes are the seeds of modern civilization.  I'm not necessarily a primitivist, as I discuss in the essays above.
Posted by Suelo at 5/03/2011 05:31:00 PM 121 comments: