We made it back to Moab from our little Colorado excursion.
(I've poached the photos from Roy's blog, since I don't have a camera)
Old Friends and Fam 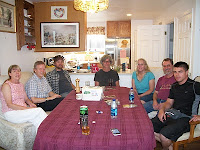 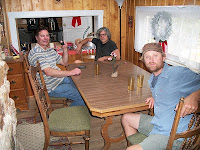 Mark Sundeen took Roy and me to my brother Doug's mountain cabin in Conifer, Colorado, where we stayed a couple nights (That's when I wrote the last blog post).  Then Mark took us to Louiseville, outside Boulder, where we had dinner at the house of my old friends, Tim, Sherry, and their son Daniel.  My old friend Joan showed up with her 2 daughters, Charya and Maitri, and an old acquaintance, Bruce.  It was good going over old times, but also kind of emotional, talking about my little Mount Evans escapade (see last blog post;  Joan had been my room-mate at the time).
Roy and I then went back with Joan and her kids to Thornton (suburb of Denver) and stayed with them and her husband, Sokha, for a week or so.  Then Sokha took us out to Arvada to train-hop.
Snitching on Hobos 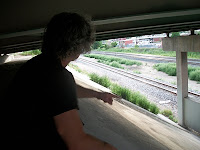 We spent the first night under a bridge, and the
trains kept stopping in the wrong direction. The next day we walked westward to where the trains went by an opulent neighborhood (which is unusual).  Rainy storm clouds were gathering, but there happened to be a horse trailer for shelter right by the tracks and we camped the 2nd
night there.  Again, no trains were stopping in the westward direction so we finally decided to walk out to hitch-hike.  Funny, I kept thinking
in the back of my mind how things always work out when we're on the
verge of giving up, that a train would stop right as we were walking
away.  Sure enough, it did!  We got excited and overconfident and loud.
We hopped into an empty scrap car, but a resident of one of the McMansions spotted us, came out with his cell phone, yelling out to us from his back yard.  I was feeling attached to our car so wanted to
just lay low and hope for the best, but Roy thought we should get out and 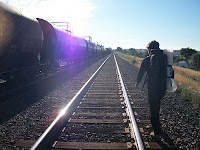 hide in the bushes.  We finally did.  But another train came eastward
and slowed way down, blocking our way to the westward train.  That got me a bit worried we wouldn't be able to get on if we didn't do it now, so we did.  Roy was still worried about cops coming, but I, Mr
Over-confident, told him we shouldn't worry so much, that I hadn't
gotten caught by cops in 10 years of train-hopping.  But...duh,..the cops came, and they knew exactly what car we were hiding in, and cited us.  Totally avoidable.  Roy was right.  So we ended up hitching out.
I later called up the court to see if I could work out community service and
avoid court.  They told me they thought it would be possible, to call back in September, and I could probably write out a plea thingy. 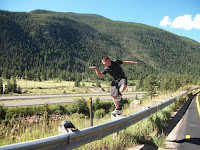 Family and Teeth
We hitch-hiked to to my parents' in Fruita, Colorado, where we stayed almost a week.  Roy and my parents got along splendidly.  I think my parents fell in love with Roy. 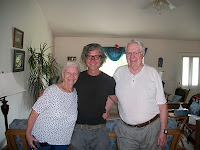 My parents also got me hooked up with an old friend of our family's, Don Adams, a retired dentist who goes to their church, and he fixed up my teeth for free!  He has been doing free dentistry for homeless people for years, as well as doing mission trips to Peru and Siberia to do free dental work.  He's a quiet, gentle man, and you'd never know all that he does for people - he never talks about it.  I didn't want to ask him to do my teeth, but my parents let the cat out of the bag.  I feel so grateful.
We had pretty much gourmet dinners every evening at my parents' - most all bargain food (3 for the price of none) from the supermarket "specialty section".  The last evening there, my brother Ron, my nephews, Kyle and Wayne, with Wayne's wife, Lila, joined us for a nice dinner.
It feels good being back in Moab.  We're here just in time for Ramadan.  Carolyn and John and I decided to celebrate it this month.
On the philosophical side of things, because of a plethora of comments and questions from Evangelical Christians, I recently added FAQ # 32 to the website: Don't you know about grace? Aren't you trying to "work" for your salvation?
Posted by Suelo at 8/12/2010 02:39:00 PM 53 comments: