The Quest for Gift Economy

I'm in Provo, Utah, at least until tomorrow, when I hope to hitch back to Moab.

On Board the Free Train

Another person who recently gave up money contacted me a couple weeks ago!  His name is elf Pavlik, in Germany.  That makes three moneyless folks in Europe, that I know of, I've been in contact with (Heidemarie Schwermer in Germany and Mark Boyle in the UK).  There's also another guy named Aiden in South Africa who recently started living without money for five years (though he does raise money for causes & advertises for businesses).  There are a couple others who have contacted me who I think may have given up money, I think in the USA, but I've lost their emails in all the craziness.  Hopefully I can find them again.

Weeks ago, I got sick again, for the second time this winter.  This time I had some kind of flu with a bronchial infection. Just when I was bragging about how I don't get sick!  Funny, just days before I got a mucousy cold the first time, I found several boxes of kleenex in a dumpster.  Just days before I got sick the second time with a mucousy flu, I found several boxes of kleenex in another dumpster.  Never before had I found kleenex in dumpsters.  Each time I was grateful.  But then it got me thinking: would I have gotten sick had I not found the kleenex?  Maybe that kind of thinking is superstitious.  But in this lifestyle, I keep learning, over and over, a law of attraction: for every positive in the universe, a negative comes to meet it.  For every problem, a solution comes to meet it, and vise versa. 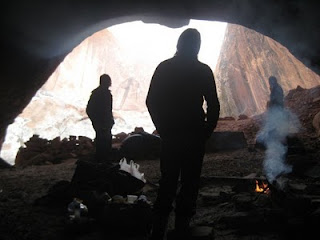 When I was just getting over my ailment, my heart-melting friend Cody came back through Moab with his girlfriend, Jessie, from California on their way back to Colorado.  It was grand, on the one hand, seeing Cody again & meeting his treasure of a partner.  On the other hand... I think you can guess how I felt, if you've been keeping up with this blog.  It's a big reason my immune system got weakened in the first place.  Yeah, I'm weak.

We did lots of fun stuff, despite my sitch.  We dined at freemeal, hung out with Brer, Haila and their baby Veda (cutest baby in the world, missed by Guiness Book of World Records), a hike with Pete, a jam at Conrad's with Chris and Brer, and a camp-out at one of my old cave haunts, joined by Pete in the morning.

My next adventure was a ride to Provo with Damian for two reasons: to attend a lecture of my archaeo-astronomer friend, John McHugh, and to do a talk to some anthropology classes at Salt Lake Community College about my moneyless "anthropological experiment."  I had been invited months ago by Jude Higgins, the professor. Before I gave the talks, she came and met me at John's archaeoastronomy lecture (John's the one who has found evidence that the stories in the Bible and Quran are based on star constellations that go back to Babylon, Sumer, and possibly before).  John's lecture was totally intriguing, and Jude may have him talk to her classes sometime, too.

My talks at SLCC happened last wednesday and thursday.  The first was to an archaeology class and the next three were to anthropology classes.  I felt like the talks went really well, though I was a bit tired the first day for lack of sleep.

I talked mostly about my theory that the imbalance of human culture, our separation from the balance of nature, came with thought of credit and debt (manifest through barter, money, and agriculture).  The beginnings of this imbalance is described in the myths of the world.  In cultures around the world I'm theorizing it is described in zillions of versions of the myth of Stealing Fire from Heaven (see "Our Fall from Grace: Our Departure from Gratis: the Beginning of Money" in my website).  In our own Judeao-Christian tradition, it's the Knowledge of Good and Evil, which is Thought of Credit and Debt.  I also talked about the concept of "The Original Affluent Society," first presented by the anthropologist Marshall Sahlins at a symposium in 1966.  The first chapter of his book, Stone Age Economics, is also called "The Original Affluent Society, and it thrilled me to no end reading it.  Sahlins basically points out that hunter-gatherers have more leisure time than other cultures, along with virtually no worry.  Sahlins' ideas are totally confirmed by the present-day hunting and gathering culture, the Hadza, which I wrote about in my last blog entry, "Creation Now."

My "anthropological experiment" for the last decade has been to use my own self as a guinea pig to test these ideas. 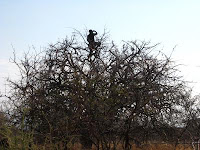 Something else I brought up is that true hunter-gatherers do not practice trade (except rarely in modern times) and agriculture, but they live under gift economy.  What is striking of true hunting and gathering cultures which have been studied by anthropologists is that, not only are they in total balance with their environments, with zero population growth, they are egalitarian and non-classist, including in gender relationships, and they are non-warring.  By non-warring I'm not talking about natural self-defense, but about one population going to full-on war with another.

Originally, what made me doubt my developing theory was how other primitive cultures, like tribes in Papua New Guinea and the Yanomamo in the Amazon, are quite violent as well as sexist.  However, the Yanomamo and the New Guinea tribes are not true hunter-gatherers (as is often thought), but are agriculturists who embrace trade!  These tribes, in fact, are a great model for understanding our own culture.  They show how the beginning of trade and agriculture may have begun in our own cultures.

With Thought of Credit and Debt comes trade and agriculture.  Agriculture itself is a form of Thought of Credit and Debt.  You plant (invest) a seed and wait for your future reward (credit).  Vengeance is also Thought of Credit and Debt.  Vengeance is pay-back.  "You killed one of our people; now we must kill one of yours" is the common theme of warring tribes.  True war is not based on self-defense but on vengeance and sense of possession, of ownership.   Agricultural and trade cultures amass resources they don't need, or they create shortages, for the sake of trade and for the sake of building political alliances, rather than for the sake of basic human needs, as we see in the studies of the anthropologist Napoleon Chagnon in his observations of the Yanomamo (Yanomamo: the Fierce People, p. 62 & 149).

When I talk of war, I am not speaking of basic self-defense.  For example, when a lion takes down a wildebeast from its herd, the herd will do its best to defend itself or run away.  But once a wildebeest prey is taken, the wildebeests let it go.  Wildebeests have no sense of vengeance, of payback.  Unlike modern humans, wildebeast don't think, "now we must war against the lions and wipe them out."  We humans like to wipe out whole populations of wolves or cougars when they take one of our sheep. With trade and agriculture came massive extinction, deforestation, and famine.

I'm truly not sure what it will take for our world societies to change.  A big disaster?  When quakes, hurricanes, tsunamis and tornadoes or economic depressions hit populations, people usually forget about money and grudges (debts) and start freely helping--freely giving and freely receiving.

I am positive that the only way we can find balance and healing is to give up our delusion of possession and  take on gift economy,with or without a disaster.  History shows us that trade economy simply does not work in balance and never will.  Perhaps we don't necessarily have to return to hunting and gathering (and I don't expect everybody to go live in a cave like I do), but we must return to the principles of gift economy and possessionless living that are the basis of hunting and gathering cultures.  Possessionless living may not mean giving up our technology, but reducing its quantity and sharing it.  Sharing, like we supposedly learn in kindergarten!

After talking about these things, I opened it up for questions and comments.  Most questions were about the daily practicalities of my life, but a few students wanted to discuss more the philosophy of the moneyless lifestyle.

I feel privileged and happy Jude Higgins (the professor) invited me to talk to her classes.  I felt a real connection with her.  A very pleasant and fun person.  I think we'll have a lasting friendship.

So I'm still in Provo.  I was planning on hitching back to Moab today, but it snowed like crazy again, yesterday and today.  I'm probably heading out tomorrow.  That seems good, because now I get to see John's daughter, Emiline, and also hang out with John and his girlfriend Keerston.  I think the plan is to watch a scary movie and eat ice cream tonight.