Getting Hitched By Love I made it back to Moab a couple days ago!
I hitched out of the Gila wilderness a couple weeks ago. Funny, my first ride was from the son of one of my good friends in Moab! I had never met the son before!
My next ride was from a 40-something guy name 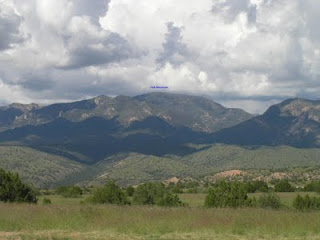 d Fred, and he took me to Alma, New Mexico (near Glenwood), and asked me to stay with him for a few days. It was grand getting to know the local cowboy folks. I even donned my cowboy garb (including those boots I had found in the Gila), listened to a lot of country music (and loved it!), and worked my ass off. Fred & I became good friends, & we were both sad when I had to leave. I hope to go back again sometime.
Another really nice 40-something guy gave me a ride all the way to Springdale, Arizona, & left me with some Christian literature. A couple took me a short ways to a turn-off to Zuni, NM, out in the middle of nowhere. There was so little traffic I thought I'd be stuck there for days. But then a 60-something Roman Catholic priest, dressed in his backwards collar, picked me up & took me to Gallup, NM. Then I got a ride into the Navajo Reservation from a 50-something man who said he knew Ram Dass. He told me he also went many years wandering, carrying a change of clothes, sleeping bag, & a Bible, with no home base but Rainbow gatherings.
A 40-something Navajo man took me all the way to Shiprock. He lived in Gallup but was going to his daughter's soccer game near Shiprock. We talked about w 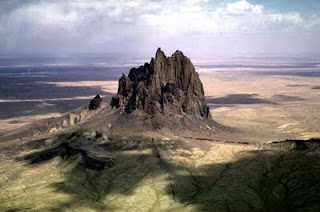 orld travels, cultures, and world religions. Really brilliant man. He said he used to be a Pentecostal, but has since expanded his vista. He gave me half his burrito. A 20-something Navajo guy then picked me up & went miles out of his way to take me to the Colorado border. He was a fire-fighter & paramedic, & told me one exciting rescue & adventure story after another. Then a 50-something Ute man brought me into Cortez, Colo, where a 40-something couple took me all the way to Dove Creek, Colo.
Then, lo and behold, I got picked up within 3 minutes by a 40-something man named Jose from Paraguay, going all the way to Moab on his way to Salt Lake City! He & I hit it off really well, chatting the whole way about everything you can imagine. We even made it to Moab before dark!
I haven't even made it back to the cave, yet! I found a new campsite nearer to town, where I'm parked until I get it together to head further out.
"Give Me Neither Poverty Nor Wealth"
My life feels so rich, now. Like the richest man on earth. I don't always feel this way (I sometimes find myself getting pissed off or discouraged, of course) but I usually do feel rich - yes, more often than not! I can't figure out if my life is so easy or it's so hard. I don't even know the difference between easy & hard anymore. I don't even know what an ascetic is supposed to be.
If I went contrary to my instinct, against my soul, for the sake of earning money, then I would definitely be a self-torturing ascetic. And if I had too much food & luxuries (addictions that abuse the body & mind) I would definitely be a self-torturing ascetic. But, also, if I did not take enough and starved myself and wore hair shirts for the sake of a hungry god of my own making, I would be a self-torturing ascetic. Take only what you need, no more, no less, and all your desires become fulfilled - desire ceases to control you. Needs and desires become One. If everybody took only what they needed, no less, no more, then the human world would come into balance as it is in the non-human world. This is no statement of genius. It's such common sense, so very simple, it's almost absurd I have to say it. But our world has lost the most basic common sense.
That Ol' Dragon
In the last blog entry, I talked about brewing visions of the world Dragon, of banking interest and the interest inherent in all of nature. It's still brewing, & it's exciting. But it's not ready yet. What's intriguing about old religious stories, myths & legends, is that the theme is constant: the little conquers the big, and the little 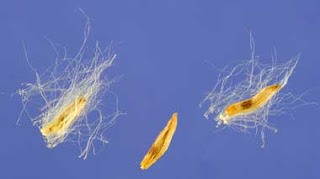 becoming the big. The little guy and the dragon, the little guy & the giant. The little desert tribe conquering the Land of Canaan (Canaan literally means Commerce!). Canaan, full of Giants. And what life form doesn't begin as a tiny seed or zygote?
Faith is the vision of the seed, the tiny becoming big, and all of nature runs on faith. It is also natural for those who lack faith to laugh at the seed. Their laughter is also part of the fun. The Tao wouldn't be the Tao if it weren't laughed at, the Tao Te Ching states. Little do the faithless know, the genetic code of a cottonwood tree is hidden in a seed as tiny as a flea.
Finding a Roadmap in a Lost World
Some man from India just emailed me some wise words and ended up saying: "The problem is that you are an example but not a road map. You need to provide a road map so that man kind can penetrate into animal kingdom of the market. If you have opened up a road and letting people realize being man instead of animal, you truly served the purpose of your life."
My reply (a bit revised):
"I keep getting glimpses of a road map, but it is still too incomplete to present to the public. Also, everything must happen one step at a time. First, be an example (prepare the ground), then plant the seed, if it is the divine will. There are too many road maps & advisers flooding the world, but few examples. The example must come first. Even if my example is not very good, it has to come first & develop. My example is still a child learning to walk, stumbling as I go... Like anybody learning to walk, I get laughed at, but also praised. Following a map is useless if we don't know how to walk. If it is the divine will, may the map come more clearly and may we be able to follow it, my friend."
I'm in the spotlight now, and I'd be a fool not to take advantage of this rare opportunity and totally enjoy it. I'd also be a fool letting it go to my head. If we've been given, by grace, bright peacock feathers to strut, why shun them? But also why forget they are a total gift and get arrogant about them? They will be gone someday, and our bodies will return to dust, as everything will, and a million years from now we specks of dust will all be forgotten in this infinite universe.
Pray for me, to stay on the Middle Path, and to relish it. 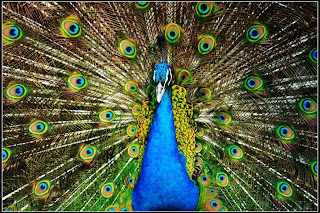